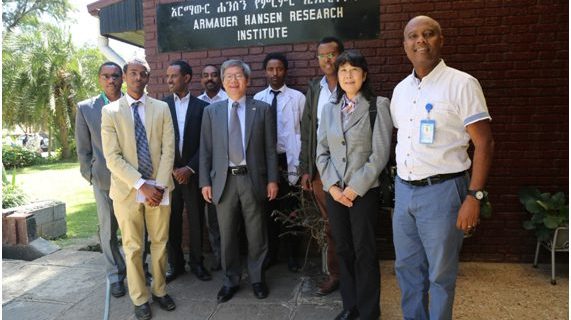 On January 29, 2019 H.E. Mr. Daisuke Matsunaga, Ambassador of Japan to Ethiopia, and Dr. Shizuko Matsuoka, Japan Embassy medical attaché visited Armauer Hansen Research Institute (AHRI) and ALERT Hospital Emergency and Trauma center. The guests were welcomed by Dr. Abebe Genetu, Director General, and Dr. Alemseged Abdissa, deputy Director General of AHRI. It was the first time for the Ambassador and Dr.Matsuoka to visit AHRI, and the purpose of the visit is to get insight about AHRI to foster possible future relations between AHRI and Japan.

The visit consisted of four major activities. The first activity of the visit was an overarching presentation about AHRI by Dr. Alemseged. Ambassador Matsunaga and Dr. Matsuoka were keen to ask questions that led into a thorough discussion with additional explanations given by Dr. Abebe, and Dr. Markos, director of Biotechnology and Bioinformatics directorate. The guests were interested in various activities of AHRI such as efforts on how to decrease the ever-stagnant incidence rate of leprosy, and the promising prospect of starting whole genome sequencing facility for genetically diverse Ethiopia.

The second activity was guided tour of ALERT Hospital Emergency and Trauma center. Dr.Yiheys Feleke, medical director and Mr. Dagnew Hagzom, CEO of the ALERT Hospital led the tour with Dr.Yared Boru, emergency medicine specialist at the hospital, giving the explanation. The guest admired the efforts made to establish the emergency center but inadequate space for beds, and lack of adequate vital sign monitoring tools for emergency patients were some of the problems observed.

Then, the Ambassador and medical attaché visited Birhan Taye Leprosy patients’ association and admired the efforts of the leprosy patients and ex-patients to be economically self-reliant. Finally, Amb. Matsunaga and Dr. Matsuoka visited AHRI’s whole genome sequencing laboratory. Discussions were made on how AHRI could link with researchers in Japan by making use of AHRI’s staff educated in Japan who can understand Japanese culture and language. Dr. Matsuoka offered to introduce AHRI to Japanese researcher in her network to look for scientists or institutions who would like to collaborate with AHRI. Ambassador Matsunaga and Dr. Matsuoka thanked AHRI for organizing the informative visit.

Malaria and NTD Research and Training Center Officially Gets Inaugurated