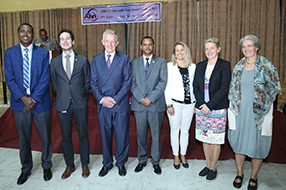 Dr. Tore Godal is a Norwegian Scientist who conducted research at AHRI about 45 years ago, and also served as AHRI Director from 1970-1973. He later joined the WHO Special Program on Tropical Diseases Research and Training (TDR). In recognition of his work with TDR, he received in January 2000 the Prince Mahidol Award from Thailand. In November 2001, he wrote a letter stating “since my international health career started at AHRI, I thought it would be appropriate to extend the benefit of the award to AHRI.” Accordingly, he donated the interest from his award to be given asan annual Prize to young Ethiopian researchers who write papers on topics related to infectious diseases. Currently Dr. Tore Godal is a Special Advisor on Global Health at Norwegian Ministry Of Foreign Affairs.

Dr. Tore Godal himself was present at this 17th award ceremony.

The first Tore Godal Award prize of this year was given to Mr. Eshetu Gelata, for his work entitled “Seroprevalence of Yellow Fever Virus and associated risk factors in selected health facilities in Borena District, Southern Ethiopia.” Eshetu received his BSc in Medical Laboratory Technology from the University of Gondar in 2008. He then worked initially as a laboratory technologist at Milemia Health center in Borena, and subsequently at Hawassa University Comprehensive Specialize hospital as a laboratory technologist and quality control officer. He received this year his MSc in Diagnostic and Public Health Microbiology at Hawassa University, and he continues to work at the Hawassa University hospital.

Emerging new viruses, and reemergence of viruses which have circulated in the past causing outbreaks of disease are of increasing public concern, as exemplified by recent outbreaks of Zika virus.

Many of these viruses can be classified as arboviruses, the “arbo” prefix stands for “arthropod borne”, meaning that the viruses are spread by insects, typically blood sucking insects such as mosquitos which transmit the virus from individual to individual. These viruses often infect other animals, leading to further spread among animals or humans. The ultimate number of humans infected can thus depend very much on changing environmental and climatic conditions which in some years can lead to an overabundance of mosquitos or animal hosts; thus, arbovirus disease can be minimal in some years, but in others be associated with unpredictable epidemics which heighten national and international public health fears. Hence, being able to predict or define potential epidemics at an early stage is an important national and international goal in health care.

In addition to the threat of epidemics spreading nationally and internationally, these viruses present major diagnostic and treatment challenges for infected individuals in the health care setting. Though many arboviral infections lead to mild infections, more severe infections can have high rates of mortality. There are no antiviral therapies which can treat such viruses. Early diagnosis associated with aggressive supportive care such as provision of intravenous fluids can be life saving for effected patients. Yet many such viruses often circulate in rural areas which have poor access to health care, and infected individuals may present too late to have any chance of appropriate therapy. Moreover, health care clinics in such settings typically lack sufficient understanding of disease presentation and the needed resources and infrastructure to provide adequate diagnosis and needed supportive care. Hence study and management of arboviral disease reflects the difficulties of heath care delivery in general in rural remote areas, and underscores the need to improve overall health care infrastructure.

One such arbovirus is Yellow Fever Virus, which continues to appear in sporadic epidemics in resource limited countries. In 2013, a small Yellow Fever Virus outbreak appeared in Ethiopia, resulting in more than 100 confirmed cases and with about 40% mortality. Yet little is known if the virus continues to infect individuals, even if at a low level, and of the various clinical presentations of Yellow fever and other related illness which may appear in rural settings. Eshetu performed a study of patients who were visiting clinics in remote regions of Borena for evaluation of acute febrile illnesses. The Borena region is adjacent to the SNNP region in which the 20213 Yellow Fever outbreak occurred. Blood samples were taken a transported to a research lab to test for evidence of Yellow Fever virus exposure. Eshetu found evidence that about 10% of such individuals had evidence of prior exposure to Yellow Fever during their lifetime. Although more tests are necessary to confirm these findings and determine if any of the patients had active Yellow Fever disease, these results suggest that Yellow Fever virus may be circulating in unsuspected regions of the country. Continued research on this virus and other arboviruses will be invaluable for improved health care and for prediction of potential future pandemics.

The second Tore Godal Award prize of this year was given to Mr. Samuel Ayele, for his work entitled “Modeling TB-free survival among HIV patients on antiretroviral therapy in ALERT and Zewditu Memorial Hospitals”. Samuel received his BSc in Statistics from Addis Ababa University and MSc in Statistics from Debre Berhan University. He has worked for the past 4 years as biostatistician in the Data Management Unit at the Armauer Hansen Research Institute.

Evidence based medicine represent a cornerstone of modern medicsal practice. Research into health care delivery can take many forms, but in essence seeks to define what is working and what is not working. Even in developed countries, treatment regiments for a given disease which have been verified in regulated clinical trials often don’t perform as well under real life health care systems. Hence, ongoing research is critical to evaluate performance of treatment algorithms. For chronic diseases such as HIV infection, one of the best means to do this is to monitor large numbers of patients over long periods of time, evaluate outcomes such as disease progression or regression, complications of disease or treatment, and identify epidemiologic, management, clinical and biomarker factors which impact outcome. Such research helps guide improved health care delivery. In resource limited countries, because of infrastructure limitations, there is even a greater need to conduct longitudinal studies, but they are often hampered by lack of adequate record keeping, availability of consistent treatment, continuity of care, and patient compliance and follow up. In addition to this, analytical methods or statistical approaches which provide more accurate estimates of these key variables or factors which impact health outcomes are rarely utilized.

One such approach, survival analysis, takes into consideration key outcomes by evaluating individual patients over time, and correcting for loss of patients within a cohort due to death or loss of follow up up.

In HIV disease, a critical test, the CD4 count, has been very useful to guide the decision when to initiate ART for infected patients, and this was particularly important in the era when antiretroviral therapy (or ART) was not always widely available, leading to provision of ART to those who need it most. Some patients were immediately started on therapy, others after several years of known infection. More recently, a number of studies have indicated that prompt initiation of ART, regardless of CD4 count, in newly diagnosed cases leads to better long term patient outcomes and significantly reduces transmission of disease at early stages. Although it is known that CD4 counts increase after initiation of therapy and that this reflects improvements in function of the patient’s immune system which had been impaired by HIV infection, whether CD4 counts should continue to be utilized as rigorously as in the past remains an open question.

Using survival analysis and data captured electronically for large cohorts of HIV patients at ALERT and Zewditu hospitals, Samuel evaluated patient outcomes over a 5 year period in terms of susceptibility to tuberculosisas well as several risk factors, including CD4 count, which might impact such susceptibility. Tuberculosis is one of the most common infections affecting chronic HIV patients and susceptibility is known to be related to impairment of host immune function. Using this more accurate and meaningful approach, Samuel observed that TB susceptibility in patients over time, even whileon ART remains strongly associated with baseline CD4, serving as a reminder of the value of CD4 monitoring at baseline as well as during the long term followup of HIV patients with this chronic infections. We congratulateSamuel on his exemplary achievement, wish him the best in his future endeavors, and proudly present him with one of this year’s Tore Godal prizes. We now call upon Dr. Taye Tolera. Director General of AHRI, to invite His Excellency Dr. Tore Godal to present the awards to our 2 winners who we ask to come forward.