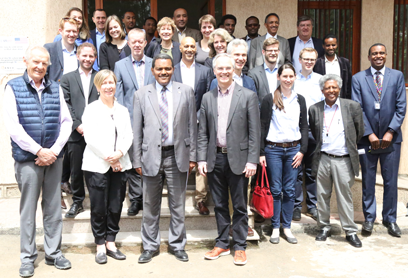 As the first African country to partner with CEPI, Ethiopia helps fill a critical gap in the fight against the next Ebola or Zika

Addis Ababa, Ethiopia, March 9, 2018 – CEPI, the coalition launched in January 2017 to finance and coordinate the development of new vaccines to prevent and contain epidemics, today welcomed the decision by the Ethiopian government to join the coalition.

During the inaugural board meeting of CEPI in Addis Ababa, the Ethiopian Minister of Health Professor Yifru Berhan Mitke announced that Ethiopia would be become the first African country to partner with CEPI. Speaking at the meeting he said:

“I have a firm belief that CEPI will substantially improve preparedness for and response to potential emerging and re-emerging outbreaks through encouraging and incentivizing vaccine development. It will help countries prevent- or at least contain outbreaks through vaccines before they cause humanitarian crisis.”

“Ethiopia has made enormous progress in primary health care over the past twenty years thanks to successive ambitious Health Sector Development Plans. It is a model for effective health system reform and governance and successful African-led development. We are hopeful and excited about the prospects of working with the Government of Ethiopia on our joint goals of developing medical countermeasures and harnessing institutional collaboration to strengthen our ability to assess and respond to epidemics threats in time.”

Richard Hatchett added: “I’d like to thank State Minister Kebede for his leadership and willingness to share his knowledge and experience. Our partnership highlights Ethiopia’s leading position on the continent as a champion of global health diplomacy.”

Today’s announcement follows the recent signing of a Memorandum of Understanding (MoU) between CEPI and the Ministry of Health. The MoU speaks to how CEPI and Ethiopia can work together in the end-to-end scope of vaccine development. This will focus on both bridging essential gaps for re-emerging infectious diseases of epidemic potential where no vaccines currently exist, and building new technologies that can speed up the creation of vaccines for new diseases when they emerge.

A major epidemic in Ethiopia could put the health and economic gains being achieved by the country at risk. Given its geographic location Ethiopia is also at particular risk of transmission from other countries. This includes diseases like MERS which has been found in camels in Ethiopia. CEPI’s investments to advance vaccine development and manufacturing for MERS, including through a grant announced this week by CEPI, will help build the insurance policy against the future epidemics that Ethiopia and other countries need.

Jane Halton, Chair of CEPI, and former Secretary of the Australian Department of Finance, said:

“We’re delighted to be able to convene our Board in Ethiopia. Today’s meeting marks an important step in our mission to work with Ethiopia in its efforts to create platforms for epidemic preparedness, and we look forward to strengthening our partnership in the years ahead.”

The Board also took part in a field visit on 7 March. The visit featured a briefing by Dr Kebede Worku, State Minister of Health on disease outbreaks in Ethiopia, and a visit to the Armauer Hansen Research Institute.

CEPI is an innovative partnership between public, private, philanthropic and civil organizations. It was founded in 2017 by the governments of India and Norway, the Bill & Melinda Gates Foundation, Wellcome and the World Economic Forum. To date, CEPI has also received investment from the governments of Germany, Japan, Australia, Belgium, and Canada. It has reached $630m of its target $1bn funding.

The European Commission has announced a contribution in kind of €250M that will support relevant projects through EC mechanisms.

Since its launch in January 2017, CEPI has announced two Calls for Proposals. The first was for candidate vaccines against Mers-CoV, Nipah and Lassa viruses. The second was for the development of platforms that can be used for rapid vaccine development against unknown pathogens.