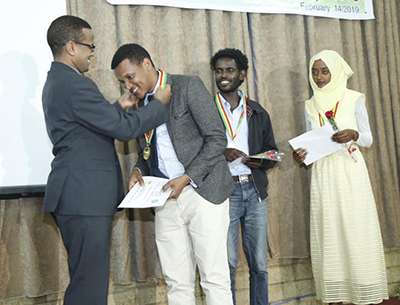 A committee of 4 persons has been established to administer the award. Members of the committee have been drawn from the Addis Ababa University, the Armauer Hansen Research Institute, and International Organization within the country. The committee has established selection criteria including relevance, originality, methodology, data interpretation, effort and conditions of work. Several years ago, to reflect the increasing volume and scope of biomedical research now being performed in Ethiopia, the decision was made that future competitions be opened up to all aspects of biomedical research, including both laboratory and non-laboratory based research, as well as research with application to both infectious and non-infectious diseases.  Accordingly, the numbers of applications have since increased, and we would like to think that this reflects a general increase in both the quantity and quality of research being conducted nationwide in the country. This year we received 36 applications, the most ever, making this year the most competitive ever. Winners receive a medal and a certificate backed by a 10000 birr cash award.  In the spirit of Dr. Godal’s vision, it is the hope that this award will encourage the enhancement of excellent research being performed in the country.

The 18th Award of the Tore Godal Prize was held on February 14, 2019 at ALERT meeting hall in presence of H.E. Dr. Amir Aman, Minister, Ministry of Health

The three winners of this year are

The first Tore Godal Award prize of this year was given to Berhanu Ayelign, for his work entitled “Validation of Locally Produced/adapted Freeze-Dried Direct Agglutination Test Antigen for the Diagnosisof Visceral Leishmaniasis at Universty of Gondar Hospital, North West Ethiopia “

Visceral leishmaniasis is caused by a parasite which invades and multiplies in the spleen, liver and bone marrow. It causes fever, weight loss, spleen enlargement, loss of blood cells, and is fatal without treatment. Diagnosis ideally requires removal of a small bit of fluid and cells from the spleen with a long needle, a procedure which is costly, inconvenient, and associated with a risk of significant bleeding. Alternative and accurate blood tests have been developed which are safer and easier to perform and are available commercially. Berhanu developed a locally produced test which using non-infectious material from the parasite. This new test was equal in diagnostic accuracy to one of two commercial tests, and superior to the other. This opens the way for production of a locally produced convenient and accurate diagnostic test for visceral leishmaniasis with greater availability and reduced cost compared to other commercial tests.

The second Tore Godal Award prize of this year was given to Semira Mitiku Saje, for her work entitled “Dietary Sodium and Potassium Intake among Adult Population of Addis Ababa, Ethiopia “ .

Semira received her BSc in nursing from Bahir Dar University in 2015, and MPH in Public Health in Nutrition. She has served as a nurse at Tikur Anbessa Specialized Hospital since 2015, and is currently an officer at the AAU school of public health.

Sodium and potassium dietary intake are major contributors to hypertension or high blood pressure, which itself can lead to many serious illnesses after many years including stroke, heart disease and kidney disease. As many as 20% of adults in Ethiopia are hypertensive. Globally, many studies have shown that the risk of developing hypertension can be reduced significantly by limiting sodium intake, such as by avoiding processed foods and excess table salt, and by enhancing potassium intake by eating fruits and vegetables. Semira did a study to evaluate the intake of sodium and potassium among a group of adult Ethiopians selected randomly from Addis Ababa. Two methods were used; the first was a comprehensive questionnaire documenting dietary intake according to the subjects’ recollection. The second method measured excess sodium and potassium present in the urine, which is related to the amount consumed in the diet. Remarkably, by both methods, Semira showed that nearly all Ethiopians were consuming either too much salt or too little potassium, placing them at risk for future hypertension. The implication is that rates of hypertension in Ethiopia may be reduced simply by dietary changes.

The third Tore Godal Award prize of this year was given to Mulualem Belachew for his work entitled: “A hybrid approach to screen a sentinel population to identify clusters of sub-patent malaria infections in a low endemic setting in Batu Degaga Kabelle, Adama Woreda, Oromia, Ethioipa.

Mulualem Belachew received his BSc in public health in 2013 from Mekele University and MSc in Medical biochemistry in 2017 from Addis Ababa University. He is currently lecturer at Wolkite University.

Great strides have been made in the past decade towards the control of malaria; however it remains a major public health problem. Worldwide efforts are focused on malaria elimination. In some countries, as overall malaria rates have lowered in any given region, the distribution of malaria becomes patchy, some areas with high and others with low levels. Areas with high transmission are termed hot spots or clusters. Targeting such hot spots rather than all regions may be one cost-effective meanscontributing to malaria elimination. Mulualem studied a region in Ethiopia of low endemicity, in the Adama woreda, and by actively evaluating households living in the vicinity of confirmed malaria cases was able to identify many such hot spot clusters. His success was in part attributable to tools capable of identifying active malaria and as well as a newly described form of malaria termed asymptomatic malaria. These infected individuals feel well even though they carry the parasite in their blood and can still infect others through mosquito bites. This study demonstrates that such hot spots indeed exist in Ethiopia and targeting such clusters should be considered as part of malaria elimination strategies.