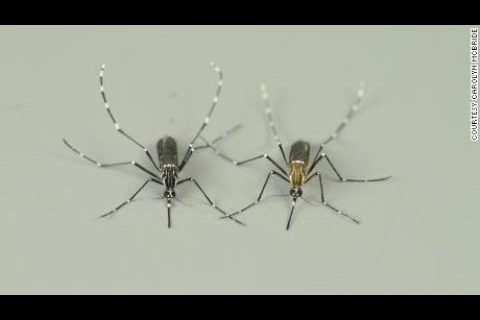 (CNN) A new malaria mosquito is emerging in African cities, with potentially devastating consequences for those living there, according to a new study.The larvae of Anopheles stephensi — India’s main mosquito vector of malaria — are now “abundantly present” in locations across Africa, researchers from The Netherlands’ Radboud University Medical Center and Ethiopia’s Armauer Hansen Research Institute said. Vectors are living organisms that can transmit infectious pathogens between humans, or from animals to people.This mosquito species only appeared in Africa a few years ago. Now, this invasive insect is “abundantly present” in water containers in cities in Ethiopia — and highly susceptible to local strains of malaria, researchers have said. Most African mosquitoes that can transmit malaria are known to breed in rural areas. However, experts were already concerned this particular mosquito has found a foothold in urban areas, including cities in Ethiopia, Sudan and Djibouti, which researchers said could increase the malaria risk for urban populations. Malaria, which is transmitted through the bite of female Anopheles mosquitoes, is both a preventable and treatable disease — yet 409,000 people died of it in 2019.Read MoreThe African region was home to 94% of all malaria cases and deaths in 2019, according to the World Health Organization.Researchers studied if the mosquitoes would pose a risk to health by spreading local malaria parasites.”To our surprise, the Asian mosquito turned out to be even more susceptible to local malaria parasites than our Ethiopian mosquito colony. This mosquito appears to be an extremely efficient spreader of the two main species of malaria,” said Teun Bousema, professor of epidemiology of tropical infectious diseases at Radboud University Medical Center in Nijmegen, in a statement.Researchers warned that swift action must be taken to stop the spread of the mosquitoes to other urban areas on the African continent in a study published in the journal Emerging Infectious Diseases on Wednesday. “We must target the mosquito larvae in places where they now occur and prevent mosquitoes from spreading over long distances, for example via airports and sea ports. If that fails, the risk of urban malaria will rise in large parts of Africa,” study author Fitsam Tadesse, a doctoral student at the department of medical microbiology at Radboud University Medical Center, said.The study findings were “significant,” said Jo Lines, a professor of malaria control and vector biology at the London School of Hygiene and Tropical Medicine. “When these things first arrive, people go ‘it’s just a mosquito, and we’ll worry about it when its a vector,'” Lines, who was not involved in the study, told CNN.”The point is, you can get rid of it when it’s new, if you wait until it’s well established enough, that you notice it actually causing outbreaks of disease… I’m sorry, that’s too late. All you can do is manage the problem,” he added.

Previous examples of once regional mosquitoes “going global” such as the Asian tiger mosquito, which is now “in the process of invading northern Europe” should serve as a warning that early action is needed to tackle the problem, Lines said.
“I think we need a greater sense of urgency about this, at the continental scale than we do at the moment,” he said. “If we wait now until we know more, it’ll be too late to get rid of it. This will be no longer a foothold that you might want to get rid of, it will be one of the native mosquitoes of a large part of East Africa.”
Read addtional news from ENA
Post Views: 661